This is a series of tutorials designed to introduce React Native and its Open Source ecosystem in plain English, written alongside the building of the F8 2016 app for Android and iOS.

In classic software development life cycles, the testing phase is always seen as just that - a distinct phase that usually happens near the end of development. This can be even more true when working with freshly minted Open Source frameworks, because their releases tend to not be accompanied by any kind of testing technology.

Luckily, React Native was built by Facebook from the very beginning with continuous testing techniques in mind. In this part we'll explore how you can use Nuclide, Flow, and Jest with React Native to improve the quality of your code as you're writing it.

Flow provides JavaScript with static type checking, and works in a gradual way, allowing you to slowly add Flow features to your code. This is really useful because we can introduce type checking in particular parts of the code without having to re-write the entire app to be Flow-compatible.

In our F8 app, we decided from the start to use React Native with Flow in its most complete form, adding type annotations everywhere necessary, and letting Flow work its magic as we progressed.

For example, lets look at one of the simple Actions we described in the Data tutorial:

We've added the @flow flag to the file header (which tells Flow to check the code) and then we're using Flow's type annotations to indicate that whatever is returned by skipLogin() must be of type Action. But that type isn't built into React Native, or Redux, so we have defined it ourselves:

Here we have created a Flow type alias that says that anything of type Action must be one of a series of different potential object shapes. The SKIPPED_LOGIN Action must only contain its own type label, whereas for comparison, a LOADED_SURVEYS Action must return the type label and a list item. We can see that the relevant Action Creator does just that:

Because we are using lots of different Actions in the app, this strong typing check lets us know simple things like having a typo in the type label, or more important things like the data payload being in the wrong format.

We also then get the same strong typing checks in our Reducers:

Because the action argument is typed as the same Action as above, the Reducer function must use an action.type that is valid. We can also use type aliases to define shapes for the Reducer's state tree section:

We showed you this initialState object in the data tutorial, but now you can see how we have forced this state tree section to conform to a defined Flow type. If the Reducer is sent, or tries to return, any state that doesn't conform to this same shape, we'll see a Flow type checking error.

Note that Flow checks are run at compile-time only, and the React Native packager strips them automatically - this means using Flow in your code doesn't have any kind of runtime performance penalty.

Of course, right now, we still have to manually run the Flow type-checker every time we want to test some code (using the Flow command line interface) but we can also use Nuclide to get this kind of verification as we write the code.

The Nuclide website contains a full rundown of the kind of React Native tailored features it offers, but suffice to say, it's a first-class IDE for React Native, built for the same people at Facebook who created React Native, and who use it to write Facebook apps every day.

The Flow integration is what we're specifically interested in though. Here we can see a sample of code from the same user Reducer that we showed with the typed state object above:

As we said before, we have defined the shape that the Reducer function must return, and with Nuclide, we can see our mistakes happening in real-time:

If we leave out any part of the State type, something that could happen accidentally but frequently when rapidly building an app, we get instant feedback that we aren't returning the correct type of object.

Nuclide will do this for all of our relevant Flow type-checking. This means, instead of waiting until the app is nearly completely built, type errors are spotted, and mistakes corrected, as the code is being written.

It might seem unintuitive, but this actually sped up development - unravelling un-typed code can be really difficult, and doing it all when you've already built your app can be messy.

We are using these unit tests to ensure that already built, functional code isn't modified in a way that introduces bugs (also called regression testing).

For example, we want to have a Jest test that ensures the Reducer handling maps data continued to work as expected:

Jest is really easy to read (note that even our Jest tests are Flow typed!), but we'll break it down:

Now we have to make running the Jest tests part of our development workflow - for example, before every Git commit - and we can be more confident that changes to existing code won't silently break the app.

The fact that Redux Reducers mutate the state tree in our app makes it absolutely vital that bugs aren't introduced, especially as bugs with state mutation could easily be missed as they might not break anything functionally, instead just sending the wrong data to our Parse Server. Their pure function nature also makes them ideal candidates for regression testing because we can more accurately predict how they should perform every time.

When you're trying to locate a bug, or find a fix for one, it's helpful to have some debugging tools on hand. We've already described how we built a system for debugging our app's visual elements, but what about the data?

We're using the Chrome Developer Tools through Nuclide along with the Redux Logger middleware, which provides the console with additional Redux context such as Actions or state changes in Reducers: 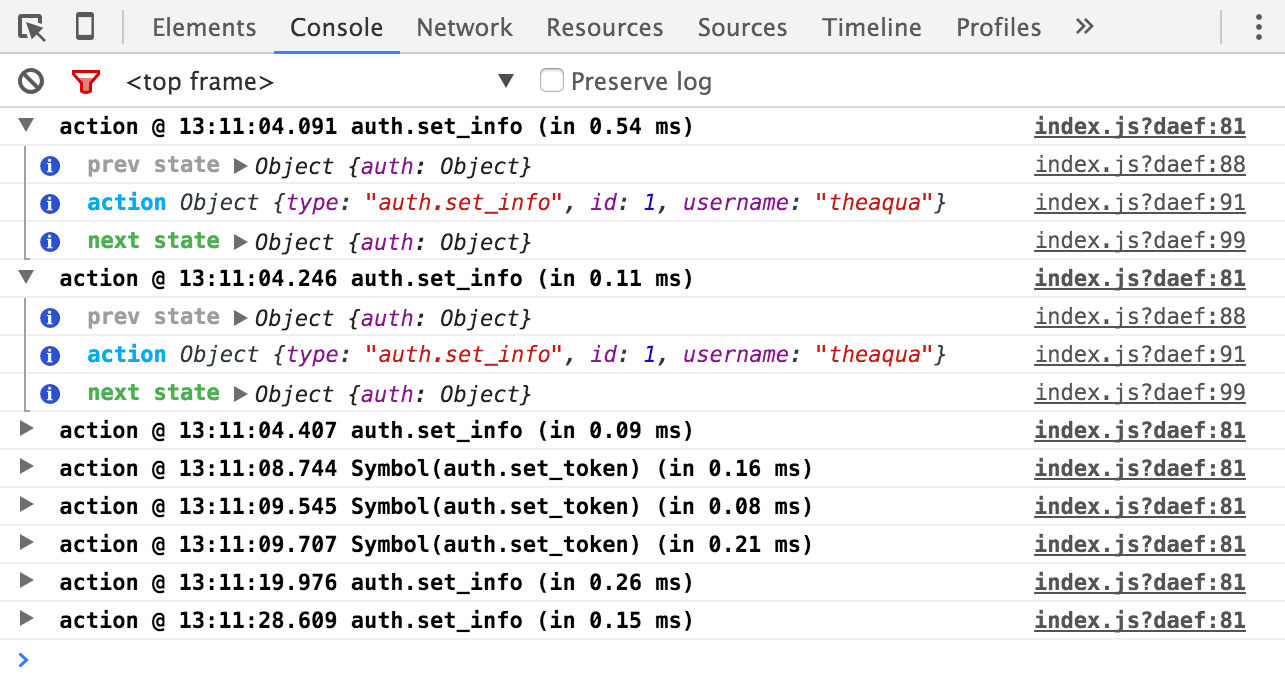 You can see how we enable this via our configureStore function: